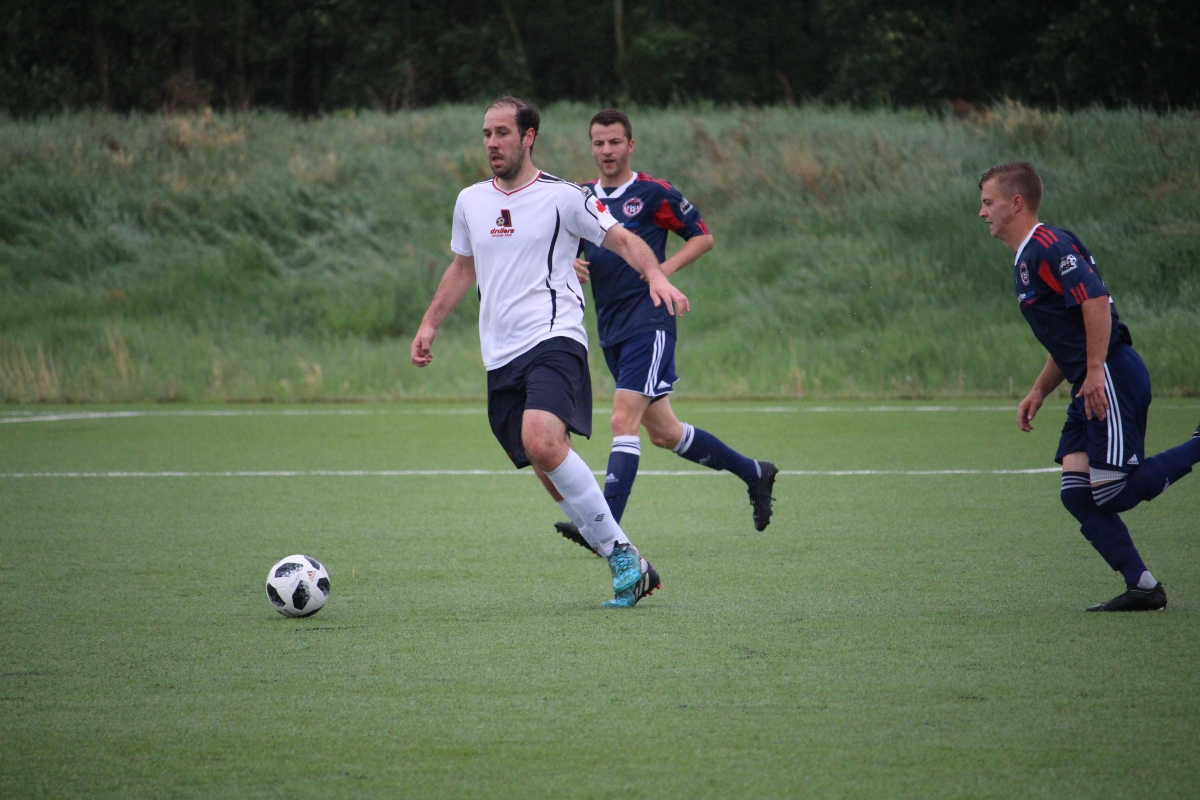 (June 28, 2018) As the 2018 AMSL season reaches its halfway point, the overall league picture has started to become more clear and teams will begin to position themselves for a deep run at the title and Provincials placement.

On the men’s side, the Edmonton Drillers have remained the only undefeated side and sit in first place after eight games. Jermele Campbell has helped lead the way in goals scored for the Drillers with four goals. Edmonton Green & Gold and Calgary Dinosaurs are both eight points behind the Drillers and sit tied for second place. Nicolas Gonzalez of Calgary Villains Elite FC leads the league in goal scoring with five goals.

Cameron Schmidt is one of the many reasons why the Drillers have found success this season as he continues to be one of the key players on the team. In 2013, the 2012 MVP moved from the Edmonton Green & Gold AMSL team to play for the Drillers and his dad, Ralf Schmidt who coaches the team.  “When I went to play for Green & Gold it was something that was incredibly tough to play against my dad and play against these guys that are my teammates  that I’ve grown up playing with,” said Cameron. While Ralf acknowledges that it hasn’t always been the easiest task to coach his own son, he has always appreciated Cameron’s determination to work for his recognition. “It’s a real pleasure to coach Cameron. The thing I really enjoy about him is that when he comes to training, he is the hardest worker in training and so that really lifts the rest of the team and makes it easy to coach him. It’s something that has kept me in coaching, to be able to coach him.”

Ralf’s coaching and Cameron’s playing abilities have clearly helped to bring some success to the Drillers this year as they sit at the top of the men’s league standings. For Cameron though, the opportunity to play for his dad goes beyond just the wins and losses on an annual basis,  “I’ve been very fortunate to have him coaching me since I was about 13 or 14 and it’s something I definitely don’t take for granted. It has been something that I will remember for my whole life getting to play all these years with my dad as my coach. It’s something special for sure.”

AMSL Commissioner reflects on the league

The AMSL was created 27 years ago with the help of Bill Malone who remains a key figure today as the league’s commissioner. Bill first became an Assistant Commissioner in 2001 and moved into the role as Commissioner shortly after. At the time of taking over, Bill’s goal was to ensure that the league would survive and his interest in the league kept him going. “I was always involved in some way or another since the league’s inception.” Bill saw the potential of this league to spur on success at a national level with teams consistently playing best on best within Alberta.  “Our success at the national level and the respect we have gained throughout the country has made me most proud. When we go to Nationals, we (Alberta) are regarded as the teams to beat no matter who goes (from the AMSL). We were, for a long time, the only province to have a true male and female major league. In fact, now when you win the women’s division of the AMSL, you’re constantly regarded as the favourite when you get to nationals.”

For Bill, the memories over the years are substantial but there is one that sticks out most, “my favourite memory was when both our male and women’s teams won the national championship in 1999 (Calgary Celtic (Callies) and Edmonton Angels). That was the start of Alberta taking over, especially on the women’s side, and that’s when we started getting true respect for the Major League.” Bill was also quick to point out how much the success of the women’s game means to him. He reflected on some of the great women’s teams in Alberta including the Edmonton Angels, Edmonton Victoria and Edmonton Northwest United but also spoke of the stories you seldom hear including that of the Lethbridge women’s team. “In the early years of the women’s league, I was very proud of the Lethbridge team. That team went to Nationals two or three times and when you consider that they are a team from a small town like Lethbridge, who had no senior program, to go on to Nationals and actually win a silver medal is a huge achievement.”

So what keeps Bill going in this role at his age? “It’s something I have loved doing in the past and I still do,” said Bill.