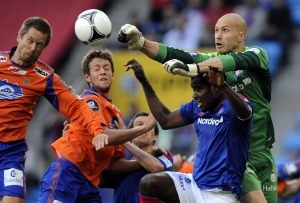 (June 1, 2016) Over the past 25 years, the AMSL has been known to help support the development of some of Alberta’s and Canada’s premier players. This week, we sat down with Lars Hirschfeld who will long be remembered for his performance with the Canadian men’s national team during the 2002 Gold Cup where Hirschfeld earned best goalkeeper of the tournament honours helping Canada to a third place finish that year. Born in Edmonton, Hirschfeld earned 48 appearances with the National Team and played professionally in Canada (Edmonton Drillers, Calgary Storm and Vancouver Whitecaps), England, Norway, Romania, and Germany. At 37 years of age, Hirschfeld currently plays for KFUM-Kameratene Oslo in the Norwegian second level.

For Hirschfeld, it was love at first sight when he caught his first glimpse of the AMSL at the age of 15. He watched the Edmonton Ital-Canadians win the 1994 national championships in Edmonton and knew he wanted to play with the club. The very next year, Hirschfeld did in fact get his start in the AMSL with the Edmonton Ital-Canadians Soccer Club and he continued to play in the league for another two years until he was ready for a professional contract in 1997.

He credits the league for giving him his stepping stone for his first professional contract in Germany and points to the league and the club for providing the “tough love” that was necessary to adjust to the playing conditions in Europe. “Mike Traficante and all the players and staff on the Ital-Canadians soccer club were huge influences on me. Throughout the 80’s and 90’s, they were considered among the top amateur clubs in Canada and the players there had years of experience with playing in National Championships. They were extremely supportive and patient with me as I developed and gave me the right balance of tough love, which helped prepare me for the more cynical football environment of professional football in Europe. To me, they are like family,” said Hirschfeld.

It is clear the league had an enormous impact on Hirschfeld as a player but he also looks back fondly on the time Edmonton Ital-Canadians SC won the Provincial Championships and subsequently the National Championships in 1997. “At the time it was the highest level of football in Alberta. Every team within the league had a strong sense of identity, and though I don’t remember the fan base being extremely large, those that did, were passionate and followed their teams throughout all of Alberta.”

Do you have a story to tell about the AMSL? Get in touch with us at communications@albertasoccer.com