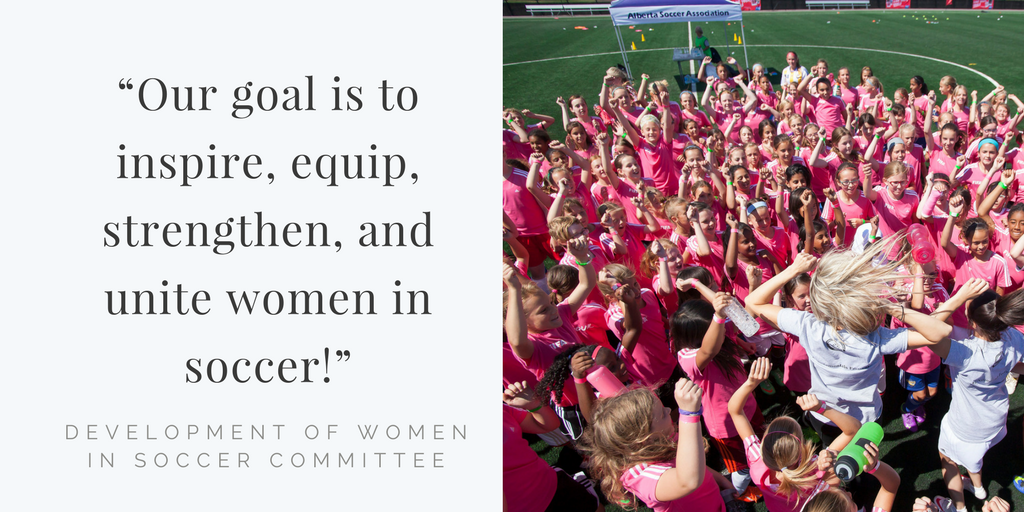 Did you know that only 27% of referees, 30% of coaches, and 40% of players in Alberta are female? And these percentages take a sharp decline the farther up the ladder we go. By the time we reach the highest levels of officiating and coaching, the ratio of male to female involvement is staggering.

We understand many of the reasons this is the case, but what’s less simple to determine is how to change it. Which is why, in 2012, we established the Alberta Soccer Association Development of Women in Soccer Committee: to pinpoint opportunities to grow the soccer community’s female population. The Committee’s purpose is to promote, support, and increase the number of women in leadership roles and as players, coaches, and referees.

The benefit of more women in soccer is twofold:

Increasing female participation isn’t about competing with our male counterparts; it’s about cooperating and collaborating with them; it’s about celebrating our gender’s unique and distinct strengths in an effort to improve our sport together.

Yes, the proportion of women in soccer is unbalanced, but it isn’t going to stay that way. As a greater number of inspiring female leaders pave the way for the younger generations, the scales will tip and the soccer community (and society as a whole) will enjoy the benefits of gender equality in sport.

For the third year running, the Development of Women in Soccer Committee is putting on a Women in Soccer Conference. With workshops and panel sessions led by Olympic athletes, FIFA referees, Canadian Women’s National Team coaches and players, the CEO of the Coaching Association of Canada, and many more, this conference is designed to inspire, equip, strengthen, and unite women in soccer. Whether someone is already established in a leadership role, or they’re motivated to start their journey, the conference has fantastic development and networking opportunities that will empower the participants far beyond the soccer field.

Together, we can level the playing field!