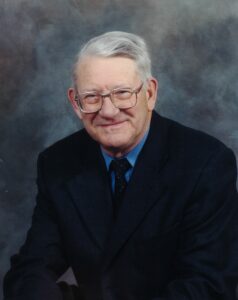 It is with great sorrow that we inform the passing of Peter Burnell Hancock, Alberta Soccer Life Member, on the 8th of September of the present year, at the age of 90 years. Mr. Hancock is survived by his wife Jean; his son David and daughter Jennifer; grandchildren Neal, Craig, Cian, and Brielle; as well as an extended family in England and Canada.
Born in Welwyn Garden City, Hertfordshire, England, on July 31, 1932, Peter Hancock and his family eventually moved to Wye. It was there where he met the love of his life, Jean, whose family was from Brooks, Alberta originally. At the age of 18, he was called up for National Service in the Royal Air Force from 1950 – 1953 as a ground wireless mechanic and was posted to Germany.
A couple of years later, Peter moved to Canada employed by Canadian Marconi. He married Jean in 1957 and they lived in Kippens and St. John’s, Newfoundland. Their first son, David, was born in 1958. The Hancocks moved to Alberta in 1961, first to Edmonton and then settling in St. Albert. Their daughter, Jennifer, was born in 1968.

In our province, Peter Hancock played an important role with St. Albert Soccer, Edmonton Minor Soccer Association, and Alberta Soccer. Due to his longstanding participation with our Association, he became a Life Member in 1982.

Everybody is welcome to join Peter’s family at the memorial service in his honour that will take place at 2:00 p.m. on Saturday, November 19, 2022, at the St. Albert United Church, 20 Green Grove Drive, St. Albert.